A total of 33 people have died of Meningitis while some 214 others are under treatment in the Upper West Region.

The Upper West Regional Director of Health Services, Dr. Osei Kuffuor Afreh who disclosed this at a media encounter in Wa today [Saturday] said the situation has become a major health problem in the Region as people fail to report the endemic to health facilities.

“Currently, our region is saddled with two main health problems. The first one is COVID-19 and the second one is Meningitis. So far we have over 214 recorded cases of Meningitis with about 80 percent of the cases coming from four facilities mainly Nadowli, Jirapa, Nandon and the Wa Municipality.”

“We have also recorded about 33 deaths of Meningitis and the deaths are not confined to one particular district or age group. All age groups are being affected and it is one of the serious things. Mostly every year around this time, between November to March, April, we tend to have cases of Meningitis because the risk factors for Meningitis are very high,” Dr. Osei Kuffuor Afreh said.

Meningitis is an inflammation of the meninges, the membranes covering the brain and spinal cord.

It can be caused by a variety of organisms that include bacteria, fungi or viruses.

There have been outbreaks of meningitis in the past, the most recent being in 2017 where over 60 people were put under surveillance following the death of some six students from meningitis nationwide.

In March 2020, one person died from meningitis while another was diagnosed with the disease while receiving treatment at the Bolgatanga Regional hospital in the Upper East Region.

The deceased aged 80, was diagnosed with Streptococcus Pneumonia Meningitis at the Tongo District Hospital in the Talensi District.

She was later referred to the Bolgatanga Regional Hospital for higher treatment but died on Monday, March 2, 2020. 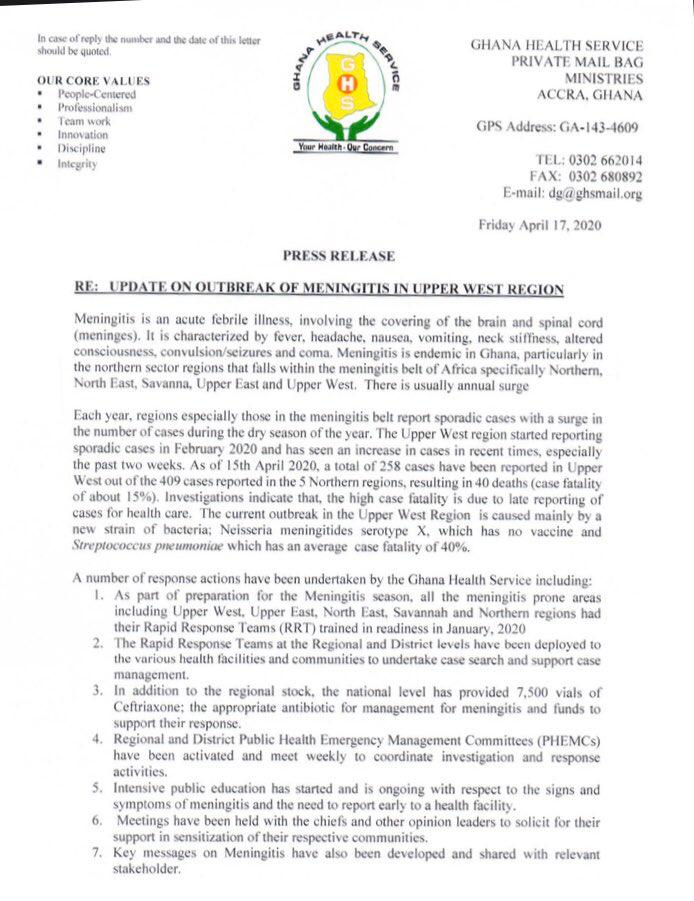