The former CEO of the Ghana Cocoa Board, Stephen Opuni, was absent in Court on Monday, May 17, 2021, due to ill-health. His lawyers, led by Samuel Codjoe, told the Court presided over Clemence Honyenuga JSC that Mr. Opuni had been referred to a Specialist for tests to determine his actual ailment.

According to Samuel Cudjoe, Mr. Opuni had already undergone two tests which came out inconclusive, while he continues to experience rising body temperature.

The Director of Public Prosecutions, Yvonne Atakora Obuobisa, who represents the State on the matter, questioned the notice. Describing it as “vague”, she argued that such a notice, which serves the purpose of an excuse duty form, should have been addressed to the Registrar detailing specific timelines to guide the proceedings.

Still on this matter, the Director of Public Prosecutions also disclosed to the Court that she has sighted a motion for stay of proceedings to enable the accused persons to pursue an interlocutor appeal on the dismissal of their submission of no case.

Upon hearing the State conclude its evidence against them, the accused persons made a submission of no case last week, but were dismissed and ordered to open their defence.

Mr. Opuni, being 1st accused, was expected to be the first to open his defence on Monday, but the notice of his health condition meant that he couldn’t do so.

The DPP told the Court that her side had not been officially served with the processes, but was only notified by Mr. Opuni’s lawyers.

The Supreme Court Judge sitting as an additional High Court Judge, Clemence Honyenuga JSC, upon listening to all the parties ruled thus on both matters;

“Having been served with a copy of the medical report on the 1st Accused, he is excused from attending Court today. Counsel for the 1st, 2nd and 3rd Accused Persons have indicated that they have filed a notice of appeal, and also motion for stay of proceedings fixed for the 27th of May. Both the DPP and Counsel for the Accused Persons have consented to abridge the time for hearing of the said motion to the 26th of May 2021, at 10.30am for hearing. Consequently, the case is adjourned to the 26th day of May. “

The post ‘Unwell’ Opuni appeals dismissal of ‘submission of no case’ appeared first on Citinewsroom - Comprehensive News in Ghana.

Capital bank collapse: Ato Essien to appeal dismissal of his submission of no case 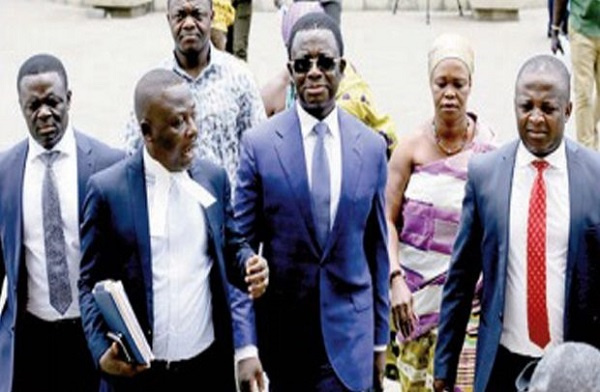 COCOBOD trial: Court rules on Opuni, others submission of no case today

Ato Essien, others to file submission of no case

COCOBOD Trial: Court erred in dismissing our submission of no case – Defence lawyers