Officials in Ethiopia’s Somali region on Tuesday said hundreds of civilians were killed after militia forces from the neighbouring Afar region carried out attacks there.

A large number of Afar regional militia forces on Saturday crossed the border to Somali and carried out attacks, sparking fierce fighting between the two sides.

It’s not yet clear why the Afar militia has carried out the unexpected attacks but the two regions have long-standing territorial disputes.

The Somali regional government’s spokesperson, Ali Bedel, confirmed attacks were carried out in the Sitti zone of Gedamaytu and Gabraiisa areas.

Ali told Reuters that an armed militia from the Afar region carried out a “massacre” on Saturday and as a result hundreds of civilians had been killed.

He did not specify the number of casualties in the attacks. 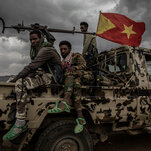