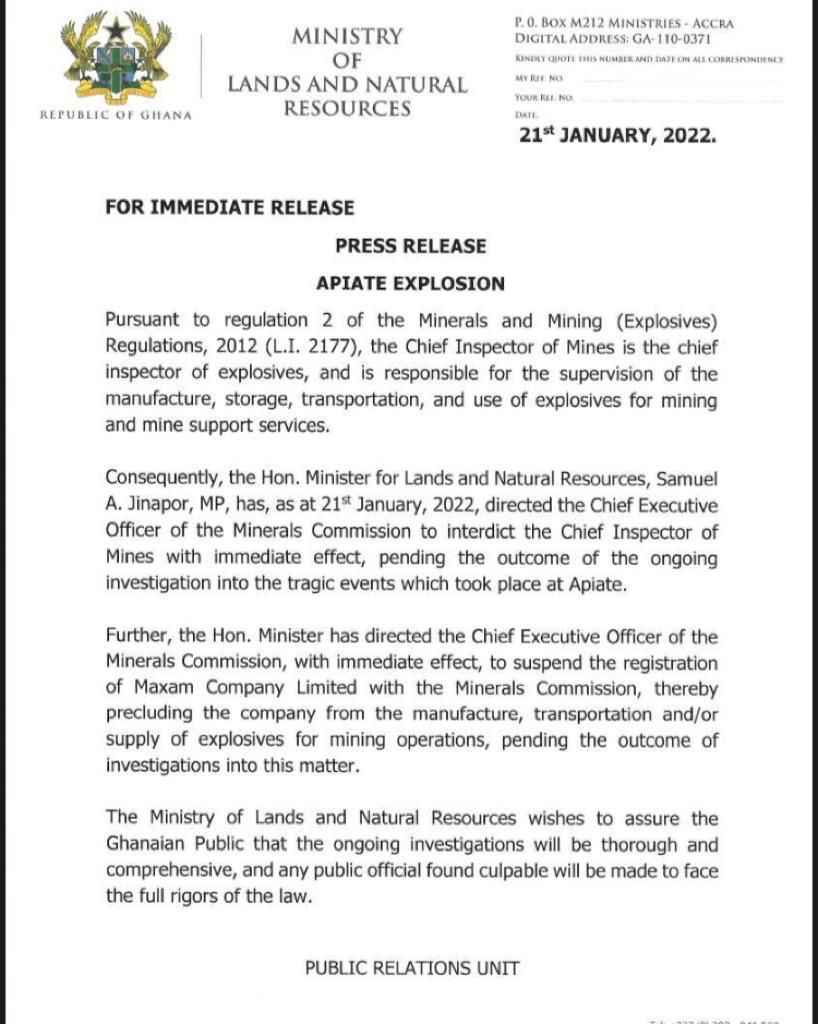 The government has suspended the license of a mining services contractor; Maxam Limited, following a huge explosion at Bogoso-Appiate on Thursday, January 20, 2022.

The explosion occurred after a motorcycle went under a truck carrying explosives owned by Maxam Limited.

The explosives were being transported to the Chirano gold mine, run by Toronto-based Kinross (K.TO).

A statement from the Ministry of Lands and Natural Resources which disclosed the suspension also indicated that the Chief Inspector of the Mines has been interdicted, as investigations into the incident continue.

“Consequently, the Hon. Minister for Lands and Natural Resources, Samuel A. Jinapor, MP, has, as of 21st January 2022, directed the Chief Executive Officer of the Minerals Commission to interdict the Chief Inspector of Mines with immediate effect, pending the outcome of the ongoing investigation into the tragic events which took place at Appiate.”

“Further, the Hon Minister has directed the Chief Executive Officer of the Minerals Commission, with immediate effect, to suspend the registration of Maxam Company Limited with the Minerals Commission, thereby precluding the company from the manufacture, transportation, and/or supply of explosives for mining operations,” portions of the statement said.

The explosion has killed at least 13 people and wounded more than 100 others as well as levelling several buildings in the area.

Video footage from the aftermath of the blast showed a huge crater, prompting people to compare the area to a war zone.

The truck that was involved in the explosion was heading to a Chirano Gold Mines.

According to the mining company, the truck belongs to Maxam Limited.

Following the Thursday afternoon incident, many different accounts have been given, including claims that the driver and the motorcyclist had died.

Others also claimed that there was no security escort for the transport of the explosives.

But according to the Police, the motorcyclist, truck driver and police escort all survived the deadly incident.