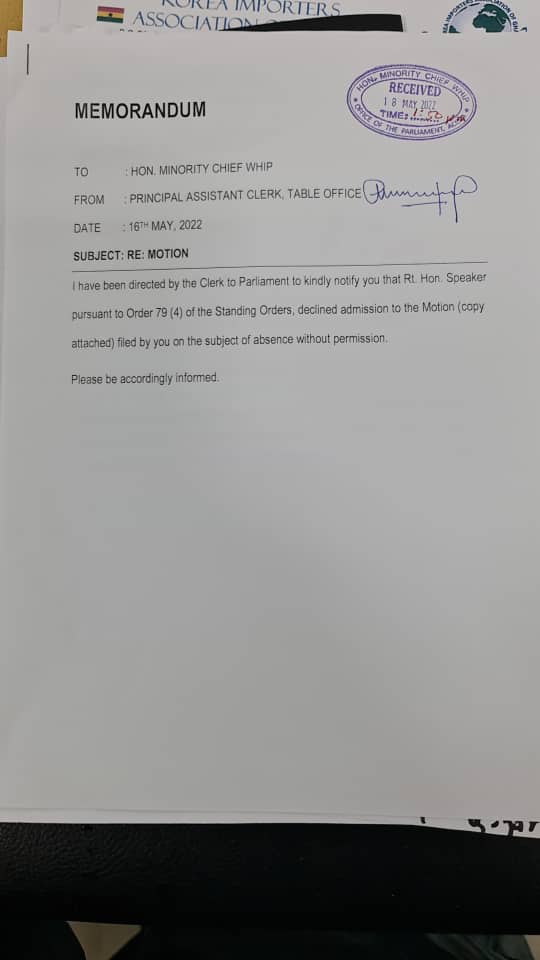 A memo addressed to Muntaka from the Office of the Principal Assistant Clerk said the Speaker had directed that he is informed that the motion has been dismissed.

“I have been directed by the Clerk of Parliament to kindly notify you that Rt. Hon. Speaker pursuant to Order 79(4) of the Standing Orders, declined admission to the Motion filed by you on the subject of absence without permission,” the memo read.

In Muntaka’s motion sighted by Citi News, he called on Parliament “to revoke, cancel or rescind the referral made by The Rt. Hon. Speaker on the 5TH Day of April 2022, to the committee on Privileges to consider the issue of absence without permission from the House under Article 97 (1) (c) of the constitution and Standing Orders 15 and 16 of Honourables Sarah Adwoa Sarfo, Henry Quartey and Kennedy Ohene Agyapong.”

While referring the three MPs to the committee, the Speaker of Parliament, Alban Bagbin, said the absence of the MPs without his permission constitutes a breach of the rules of the house.

In Parliament on Tuesday, Mr. Bagbin urged the committee to provide its report to the house two weeks after the House reconvenes from its recess.

The Speaker of Parliament’s referral to the Privileges committee was premised on a petition filed by a former MP for Kumbumgu, Ras Mubarak to tackle absenteeism in Parliament.

He cited Dome-Kwabenya MP, Sarah Adwoa Safo; Henry Quartey, the MP for Ayawaso Central, and Ebenezer Kojo Kum, the MP for Ahanta West and Ken Ohene Agyapong, MP for Assin Central as MPs who he said had flouted provisions of Article 97(1)(c) of the Constitution.

He also said they had breached Parliament’s Standing Order 16(1) which frowns on Members absenting themselves for 15 sitting days without permission from the Speaker.

The post Privileges Committee will go ahead with probe on absentee MPs case – Bagbin appeared first on Citinewsroom - Comprehensive News in Ghana.