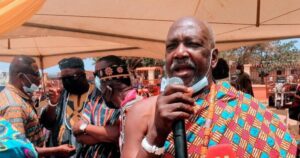 Nii Tetteh Otu II, Paramount Chief of Kpone Traditional Council, has cautioned Ghanaians, especially the youth, to desist from entrusting their future into the hands of politicians as they have, over the years, not been sincere with the masses.

In an interview with the Ghana News Agency at Kpone, the Paramount Chief said based on the political history of the country, “most of the promises of politicians, whilst in opposition, become a fantasy when they win political power.”

He said the youth must, therefore, take their destiny into their own hands, work hard, venture into entrepreneurship, and seek opportunities in the global world system.

According to the Kpone Paramount Chief, no president had performed better than Dr Kwame Nkrumah, Ghana’s first president, who prioritised the needs of the masses.

Nii Otu said Ghana was endowed with natural resources, which could be exploited to develop the country, instead of the overreliance on foreign aid and grants that often came with unpleasant conditions.

He called on the government to stabilise the cedi against the other foreign currencies to aid businesses and improve living conditions, as well as use the local resources to cushion the people in times of difficulty.

Mahama does not want to inherit a destroyed economy – Amaliba