MTN FA Cup: Hearts cruise into Round of 32, Kotoko stunned

MTN FA Cup: Hearts cruise into Round of 32, Kotoko stunned

Accra, Feb. 23, GNA - The Round of 64 of this year's MTN FA Cup produced some surprising results at various centres across the country.

Holders Asante Kotoko were eliminated from the competition by Division One League side Asokwa Deportivo.

A goal from Ransford Owusu Frimpong and Godfred Abban was enough for Deportivo to cruise into the round of 32. Richard Arthur scored the consolation for Kotoko.

Hearts edged their counterparts Danbort FC 2 - 0 with goals from Frederick Ansah Botchway and Joseph Esso in either half to secure safe passage to the next round.

The highly anticipated regional derby between BA United and Bofoakwa failed to produce any goals in regulation time but Bofoakwa won 5-4 on penalties to progress to the next round.

Aduana Stars couldn't go past their Premier League counterparts Bechem United as the Hunters came back from a goal to secure a 2-1 victory.

There were no problems for Premier League leaders Ashantigold SC, as they defeated Achiken FC 2-0 to book a place in the next round.

A brace for Eric Gawu was enough for Dreams as they booked a spot in the next round after defeating Phar Rangers 2-1.

Tribute: Opoku Afriyie- Made in Asante Kotoko, celebrated at Hearts of Oak

Hearts of Oak goes into partnership with Cloud Africa Limited 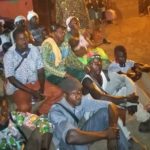 Security personnel round up 107 intruders from Burkina Faso, Benin, Togo