Ghana Web
Assistant Superintendent of Police (ACP) Dr Benjamin Agordzo, who has been accused of offering assistance to alleged coup plotters, will remain in custody, as his application for bail has been dismissed by the Accra High Court.

This is the second time the court, presided over by Justice George Buadi, has refused to admit suspects connected with the alleged coup plot to bail.

On November 11, three different bail applications by seven of the nine alleged coup plotters were dismissed by the court.

In a ruling yesterday, Justice Buadi held that Dr Agordzo’s bail application was premature, as investigations into the case were still ongoing.

According to the court, although Dr Agordzo had a right to personal liberties, such rights ought to be matched with the interest of the state.

Dr Agordzo, the court held, was a senior police officer who had the capacity and capabilities to interfere with investigations when granted bail at this stage.

“His status and experience might possibly be used to hamper and interfere with investigations. I shall, therefore, refuse the application for bail,” Justice Buadi ruled.

The presiding judge also observed that persons who occupied positions of power, especially in the security architecture of the country, must maintain some level of aloofness from certain activities.

No intention for coup

Moving the application for bail yesterday, counsel for Dr Agordzo, Mr Martin Kpebu, submitted that his client had served the country diligently throughout his service as a police officer and had never had the intention of plotting a coup, assisting anyone to plot a coup or agreeing with any group to plot a coup.

“He is two ranks away from the highest rank in the Police Service. He is truly harmless and has no motivation to undertake a coup,” counsel argued.

Touching on Dr Agordzo’s credentials, Mr Kpebu said he was the Director of Operations of the Ghana Police Service from 2015 to 2018 until he was appointed Director of the Transformation Office of the service.

“As the number one person in charge of operations of the police, he discharged his duties in such a sensitive position with mettle. The suspect is, indeed, a gentleman — harmless and patriotic — and has no intention for a coup,” he argued.

He said his client was arrested due to certain comments he had made on the social media platform of Take Action Ghana (TAG), the group alleged to have hatched the coup plot.

First, counsel said, his client had said on the platform that due to the high unemployment rate and the level of vigilantism, conditions in the country were ripe for an Arab spring.

According to Mr Kpebu, his client had made similar comments in public lectures which were well known to the public.

The TAG, he said, as a non-governmental organisation (NGO), decided to embark on a demonstration because of the Ayawaso West Wuogon by-election debacle.

Counsel said as a member on the social media platform, Dr Agordzo advised the group to seek permission from the police before embarking on the demonstration.

He further submitted that his client donated GH¢2,000 to TAG towards a philanthropic activity at Agbogbloshie and that whatever he did in support of TAG had nothing to do with a coup plot.

Mr Kpebu urged the court to admit his client to bail because he was not a flight risk and he competent people to stand surety for him.

In her response, a Senior State Attorney, Ms Hilda Craig, urged the court to deny Dr Agordzo bail because he would interfere with investigations.

According to her, the senior police officer would hamper investigations because he wielded considerable influence in the Police Service and also knew the rudiments of investigations.

It was her submission that Dr Agordzo had interactions with Dr Frederick Yao Mac-Palm, whom she described as the mastermind of the coup.

She said Dr Agordzo provided strategic and technical assistance for the plot to overthrow the government, and that the interactions he had with Dr Mac-Palm were centred on recruiting other security persons to join TAG.

According to the Senior State Attorney, as a senior police officer, Dr Agordzo should have used his position to uphold the law and prevent crimes and not indulge in activities that were geared towards the commission of a crime.

“It is our submission that the applicant had every intention to abet Dr Mac-Palm and TAG in their quest to overthrow the government,” she argued.

Nine individuals, including a medical practitioner, Dr Mac-Palm, and five soldiers, have been charged with treason on allegations of plotting to destabilise the country and possibly take over the government.

The others are Donyo Kafui, alias Ezor, a blacksmith; Bright Alan Debrah, a fleet manager, and Gershon Akpah, a weapons mechanic at the Ghana Armed Forces (GAF). 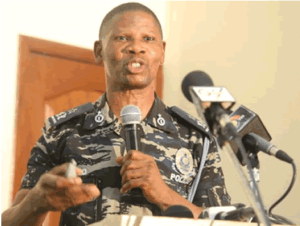