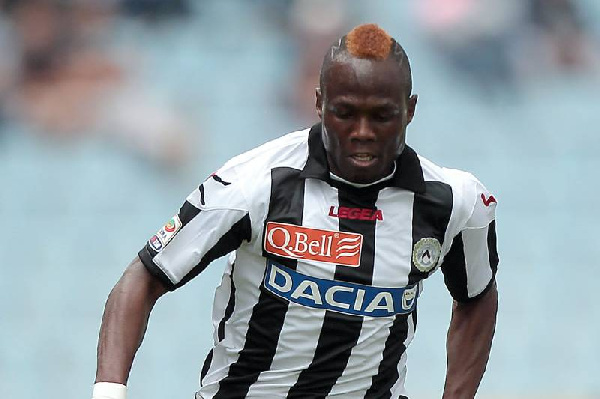 Ghana Web
Former Ghana international Emmanuel Agyemang-Badu has revealed that he is no longer contracted to Serie A side Hellas Verona.

After making a return to action for the club towards the end of last season following a health challenge, the 30-year-old was surprisingly missing when the Yellow and Blues announced their squad for the 2020-21 league campaign.

The club failed to provide an official statement on his absence, leaving many to speculate a possible health relapse. He originally joined the club on loan from Udinese.

"Right now I am no more with Hellas Verona. I cordially agreed to terminate my contract and so I'm a free agent and free to join any club,” Badu told Joy Sports on Saturday. “After all the Covid stuff, I decided to come home and rest small and find a team in January."

On Thursday, Badu announced his retirement from international duty, three years after his last call-up for national duty.

The midfielder made his international debut against Lesotho in 2008 and went on to represent the Black Stars at the 2014 World Cup in Brazil and multiple Africa Cup of Nations tournaments.

In two of the continental championships - 2010 and 2015 - he came mighty close to leaving the tournaments as a champion as Ghana ended up as losing finalists on both occasions.

In 2010, Ghana lost by a lone goal to Egypt while in 2015, the Black Stars have away a two-goal lead in a penalty shoot-out to ultimately fall to Cote d'Ivoire, the match having ended 0-0 after extra-time.

“My lowest point and biggest disappointment [in my career so far] were not winning the Africa Cup of Nations,” Badu said.

“Another of my biggest disappointment was when Udinese lost a penalty shoot-out to Braga because we lost out on qualifying for the Uefa Champions League, but in terms of my career with the Black Stars, it has to do with not winning the Nations Cup.

“The most painful was the defeat to Ivory Coast because we took a two-goal lead and still lost but as for the defeat to Egypt in 2010, it’s not regrettable.”