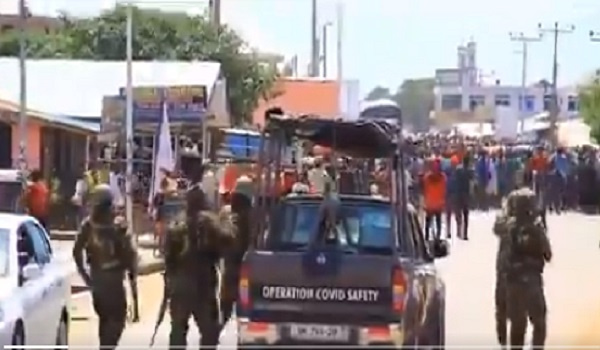 A chaotic scene it was on Tuesday, June 29, 2021 when military and police personnel clashed with unarmed civilians at Ejura Sekyeredumase in the Ashanti region.

The civilians were embarking on a protest following the murder of a social media activist, Ibrahim Mohammed, otherwise known as Kaaka.

In a video gone viral on social, the military men, who arrived at the scene in an Operation COVID-19 Safety pickup, jumped off the vehicle and started shooting what is believed to be live bullets into the air.

One of the military men was captured having knelt and positioned himself to shoot at an 'enemy' as though he was on a war front.

The police, who were behind the military men were also seen shooting in the air to scare the protesters, most of whom were already fleeing in different direction amid the chaotic scenes.

Two people have been reported dead and about six having sustained various degrees of injuries.

Meanwhile, the Ashanti Regional Police Command has said it has begun an investigation into the circumstances leading to the shooting incident at Ejura on Tuesday.

"The Police moved in with military reinforcement to quell the situation but the irate youth charged on the security officers with all manner of implements including firearms, clubs, machetes, and stones.

"The security officials fired shots to disperse the angry mob who failed to retreat but rather massed up at all corners. The death and injuries were recorded in the process.”

The Service has asked residents of Ejura to remain calm as they probe into the matter. 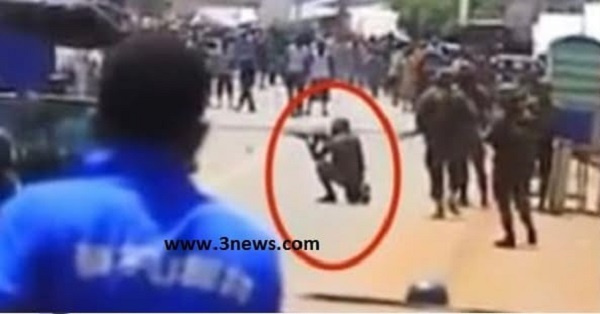 Ejura Unrest: Soldier who knelt in viral video did not fire at protesters – Commander