Ghana Web
The Eastern Regional Manager of Glo Ghana has been arrested for allegedly defiling a 14-year-old Junior High School student in Koforidua.

The accused, Awoseni Akinyemi, 30, a Nigerian, allegedly defiled the JHS2 student three times in his house at Abrewa-Nkwata, a suburb of Koforidua, and gave her contraceptive each time he had sex with her.

The suspect married with children in Nigeria was put before Koforidua Circuit Court “B” Monday, July 19, 2021.

The Prosecuting Officer Chief Inspector Bernard Annor told the court that the victim stays with the mother in Koforidua while the father works as a Manager of a Fuel Station in Tema.

He said on July 9, 2021, the father of the victim based upon a tip-off that a man has been picking the daughter with his private car almost every day to an unknown destination after school, came to Koforidua quietly to survey.

On the day, the accused did not show up. however, the father searched the school bag of the victim where he retrieved tablets of ‘Lydia emergency contraceptive’.

The alleged victim confided in the father when interrogated that, in June 2021, the accused met her at koforidua -Asokore and told her she was beautiful and that he wanted her to become his friend. She said in the same month, the accused invited her to his House at Abrewa -Nkwanta, a suburb of Koforidua on three occasions where he had unprotected sexual intercourse with her on each time she visited.

The alleged victim said the accused bought her Lydia Contraceptive anytime he had sexual intercourse with her. The father of the victim lodged a formal complaint at the Eastern Regional Office of the Domestic Violence and Victims Support Unit (DOVSSU) where a medical report form was issued to the alleged victim.

The medical doctor who examined the victim confirmed the sexual abuse stating among other things that the hymen of the victim was broken. The accused was subsequently arrested by Police.

The accused admitted the offence but said the victim visited him twice and that he had consensual sexual intercourse with her only during her first visit.

He told investigators that he gave the contraceptive to her to prevent pregnancy.

The defense counsel prayed the court to admit the accused to bail but the Prosecuting officer Chief Inspector Bernard Annor raised objection stating that the accused has no permanent place of abode in Koforidua besides has credible information that the accused was preparing to leave Ghana to Nigeria to visit his wife and children nd, therefore, may jump bail.

The Court Presided by Her Honour Mercy Addei kotei upheld the position of the prosecuting officer and remanded the accused to reappear before court on July 26,2021. 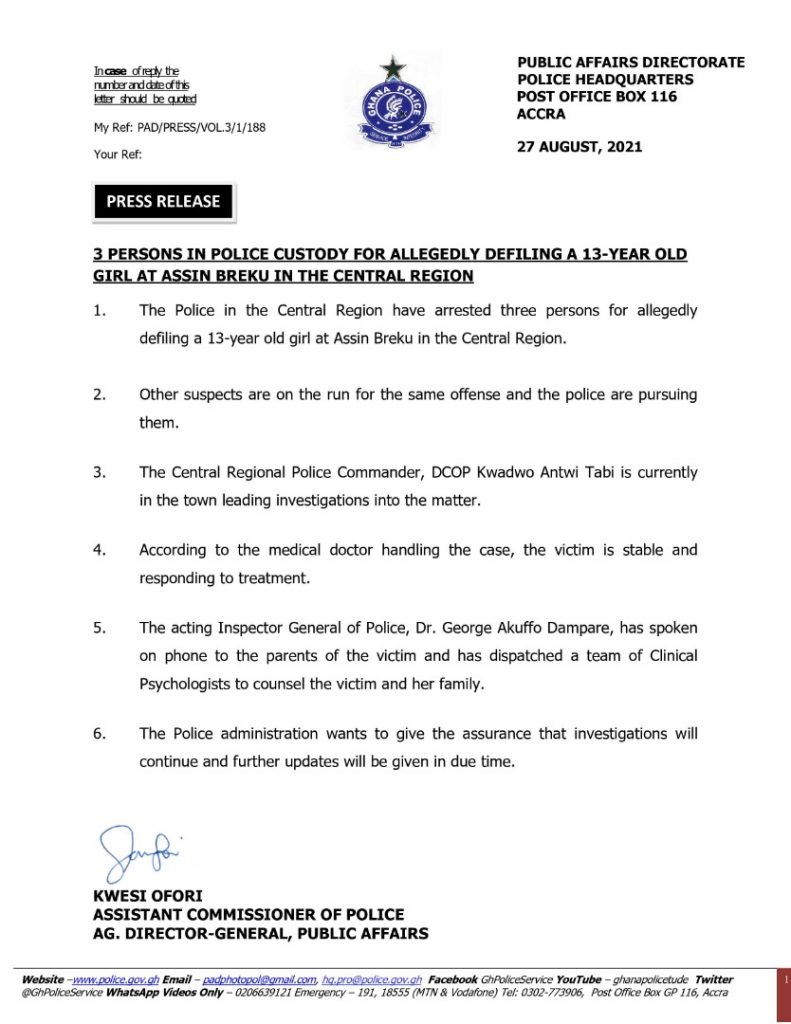