The Ghana Police Service has finally spoken from its position on the disappearance and reappearance of Josephine Panyin Mensah.

The Police Service in a statement signed by its Director of Public Affairs, Assistant Commissioner of Police (ASP) Kwesi Ofori, have confirmed earlier reports by the Western Regional Minister, Okyere Darko Mensah.

The statement indicates that Josephine who was reported missing on September 16, while reportedly carrying a nine-month-old pregnancy was never pregnant in the first place.

“Following her reappearance and on the basis of our preliminary investigations so far, the police wishes to state the following:

“The police is heavily relying on medical experts who have examined her. Their findings are that Josephine Panyin Mensah was never pregnant within the period under review following thorough medical examination by medical doctors at the Axim Government hospital,” the police statement said.

The police further stated that records at the European Hospital in Takoradi where the said she used to seek medical attention, had no record of proof of her pregnancy.

“Investigations also suggest the suspect may have conspired with other persons over her possible planned disappearance.”

“Three people have so far been arrested for further questioning on possible conspiracy charges,” the statement added.

Josephine was reported to the police as missing on September 16, with later reports indicating that some alleged kidnappers got in touch with her family to demand a ransom for her return.

She was found by a carpenter in Axim on Tuesday, September 21, 2021 and was said to be unable to speak from trauma.

She is reported to have requested for a pen and a paper through which she communicated her ordeal to the people who found her.

According a carpenter who found her, a traumatized Josephine informed him through writing that she went into forced labour when the kidnappers grabbed her. He further stated that the baby died and was taken away from her.
Her family and security officers were later contacted and she was sent to a health facility at Axim for medical attention.

The Western Regional Minister, Kwabena Okyere Darko was the first person to hint of the possibility of Josephine’s pregnancy being fake following her reappearance.

The Minister who is the Chairman of the Regional Security Council in an interview with some media houses on Wednesday, stated that preliminary report made to him by the security suggests that the pregnancy was a hoax.

His claim was however disputed by the husband of the victim, her family and neighbours who insist she was indeed pregnant.

Read the police statement below: 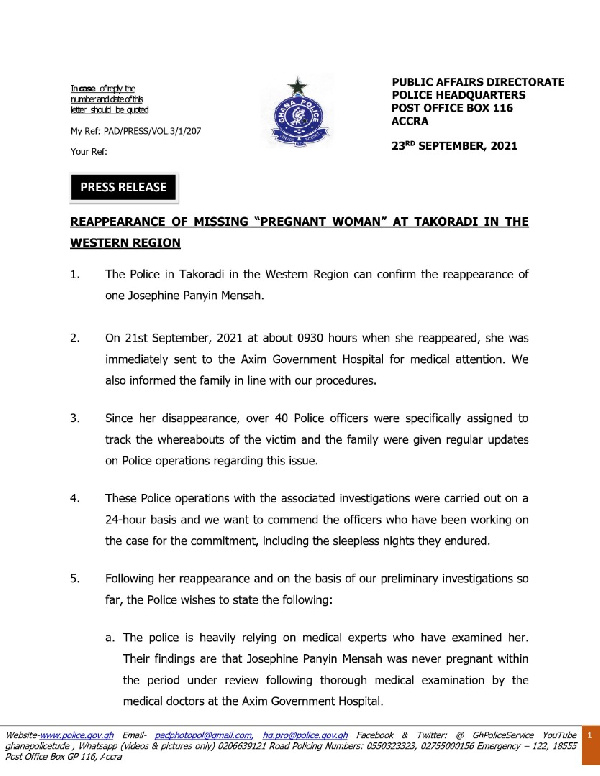 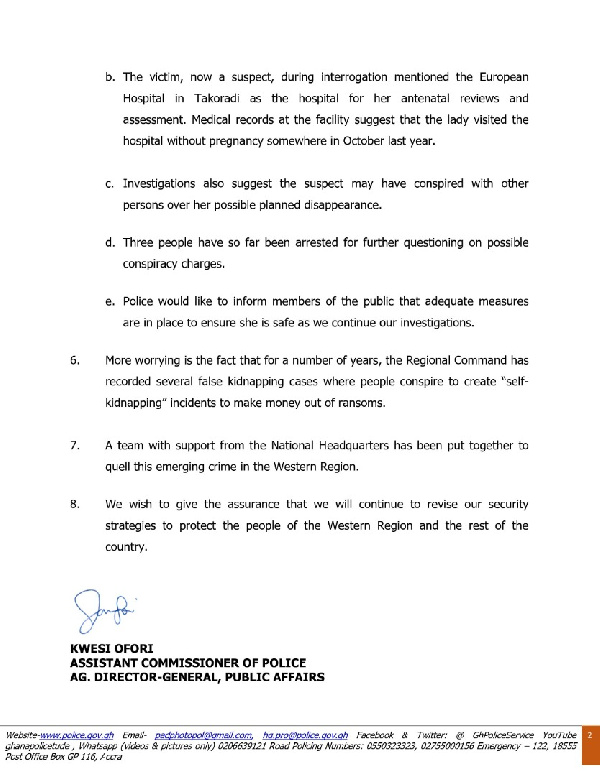