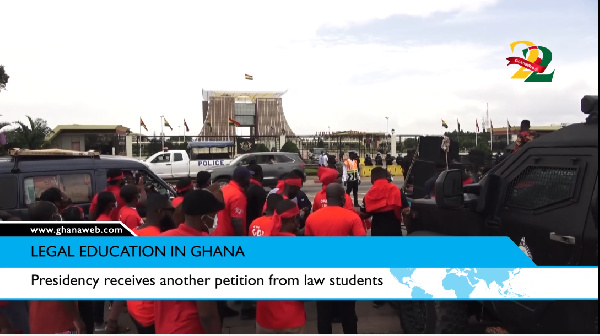 • Their demands include the expansion of legal education in Ghana

• Petitions presented to the three arms of government

Some law students from various university law faculties across the country on Wednesday, October 20, 2021, presented petitions to the three arms of government demanding immediate reformation into the nation’s legal education structures.

In their dozens, the students converged at Independence Square in Accra where they moved to the court complex to present their petition to the judiciary service.

They proceeded to the Parliament House of Ghana where they presented a copy of their petition to the legislative house through the Minority Leader, Haruna Iddrisu.

At the Jubilee House, the demonstrators were met by the Deputy Chief of Staff in Charge of Operations, Mr Emmanuel Adumoa-Bossman, who also received the petition on behalf of the President, Nana Addo Dankwa Akufo-Addo.

While acknowledging the concerns of the demonstrating students, Mr Adumoa pointed out that the President in response to a similar petition forwarded to the Presidency in the past, has already tasked the Attorney General to appropriately address their grievances.

He further stressed the President will still give attention to the petition presented today and ensure that their concerns are addressed inconsonant with the law and the responsibilities of the President.

Currently, only the Ghana School of Law located at Makola in Accra is authorized to train lawyers and also administer the General Legal Council's Bar exams.

The entrance examination into the Ghana School of Law has over the years recorded mass failures and has caused critics of the legal education system to describe it as a deliberate attempt to limit numbers in the law profession.

The 2021 Law School entrance exams had only 790 candidates representing 28% out of the total 2,824 candidates passing the exam according to results released by the GLC.

However, some aggrieved candidates have since been agitating about the results with some accusing the GLC of changing the quota system for the exam.

The candidates say the new scheme is an afterthought introduced by the GLC to deny them admission.

Among their demands, the Ghana National Association of Law Students says it wants the General Legal Council to with immediate effect cause the admission of the 499 candidates who they say passed the 2021 Law School exams.

The students also say they demand an immediate decentralization of Ghana’s legal education to give room for the law faculties in the various universities to train professional lawyers.