The President, Nana Addo Dankwa Akufo-Addo has stressed his commitment towards developing the Oti Region and by extension, the entire nation.
He has thus, urged the chiefs and people of the Oti Region to vote for him come December to enable him continue the development projects.
According to him, one of the developmental priorities of the new region was to build a bridge over River Oti, which would help connect and promote inter district and regional development.
Speaking at a durbar at Kete Karachi on the day two of his visit to the Oti region, President Akufo-Addo stressed the need for Ghanaians and Oti region to vote massively for him. This, he reiterated, would enable him to continue with the comprehensive development agenda for the nation.
He added that the NPP government only has good motive for the nation and would always remain sincere and faithful to Ghanaians in the transformational agenda of the NPP for the nation.
The President said his commitment to the development of the six new regions including the Oti region called for total support from the people to ensure that the development plans for the new regions and the entire nation would be successfully completed.
Nana said the words he heard from a prominent chief like the Krachiwura, the President of the Oti Regional House of Chiefs, Nana Mprah Besemuna III, gave him assurance that the people in the region would give him maximum votes to enable him to do more for the next four years.
The President said the government’s water for all projects would be extended to Kete Karachi where a water treatment plant would be built to ensure that potable water problems confronting the people in the area would become a thing of the past.
He disclosed that a Legislative Instrument would soon be ready to upgrade Karachi West District to a Municipal status.
The Minister for Regional re-Organisation and Development, Mr. Dan Botwe recounted the efforts made by the previous Krachiwura in 1949 and 1954 when he signed a letter appealing to the Governor of the Gold Cost to create a the Oti region.
Though it did not yield any result, the current Krachiwura and chiefs and people of Oti pursued it thereby yielding positive result this time.
MrBotwe therefore urged the people of the Oti region to, as a matter of importance, consolidate the gains made so far in the creation of the new region by voting massively for the NPP and President Akufo-Addo.
The Overlord of the Karachi Nana Mprah Besemuna III who is also the President of the Oti Regional House of Chiefs noted that on the May 15, 2019 noted that he made a request to President Akufo-Addo to reconstruct Kete Karachi town roads which was in a deplorable condition.
Nana MprahBesemuna continued that to the surprise of the people, the roads are currently being constructed and commended Nana Addo and government for the development activities in the area and Oti region in general.
He appealed to the President to facilitate the construction of a bridge over the Oti River at Dambai, citing of the Oti Regional House of Chiefs at the traditional capital, Kete Karachi, establish a technical university at Kete Karachi and improve infrastructure at the midwifery and nurses training school at Kete Karachi.
The Krachiwura assured President Nana Addo that the people of the Karachi state have already expressed their sentiments at several coral appreciation towards government’s efforts in creating the cherished dreams of the people over the years in the Oti region saying it was only a visionary leader like Nana Akufo Addo that brought the vision of the people of Oti to fruition.
The President of the Oti Regional House of Chief stressed that the people of Karachi and the Oti region are happy about the sterling leadership of the President in handling the coronavirus because more advanced and sophisticated countries of the word were not able to handle the situation.
Nana Mprah commended President Nana Akufo Addo for the introduction of the free Senior High School (SHS)which Nana Mprah Besemuna noted has made the rich and poor children equal to enjoy second cycle education thereby making the Ghanaian child comparable to any child across the world.

The post I need your vote for more development -Akufo-Addo rallies Oti Region appeared first on The Chronicle Online. 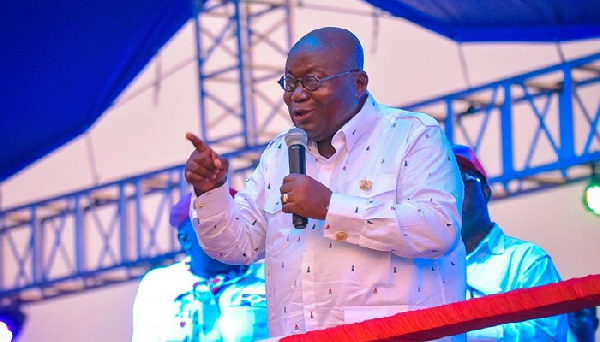 Four more for who? [Article]

TALKING DRUM: Hello Nana Addo, should I vote for you?

Dear Ghana, I beseech you to vote for my husband