Presidency: No govt official has tested positive for COVID

Presidency: No govt official has tested positive for COVID

The Director of Communications at the presidency, Eugene Arhin, has described as false, rumours making rounds that some government officials have tested positive for the dreadly coronavirusand are in isolation.

Mr Arhin has therefore, urged the public to ignore the rumours which he said were vile propaganda.

The rumours started spreading via a fake press release that listed some top government officials as having tested for the virus.

The list included Nana Asante Bediatuo, Executive Secretary to the President, Kwaku Ofori Asiamah, Minister  for Transport, Shirley Ayorkor Botcwey, Minister for Foreign Affairs and Regional Integration and Yaw Osafo-Maafo, Senior Minister as having contracted the novel coronavirus infection (COVID-19) when they travelled with the President to Norway.

But Eugene Arhin explained that the publication was false and that none of the listed officials had tested positive for the virus, or was in isolation as being claimed.

This is not the first, government has moved to quell such a false report.

Two weeks ago, Minister for Information, Kojo Oppong Nkrumah, denied similar claims on social media that President Nana Akufo-Addo and some of his appointees have tested positive for coronavirus.

Speaking at a press conference, Mr Nkrumah cautioned people to desist from the practice of spreading fake news.

“There are people even though in these trying times take delight in fabricating stories and throwing them out there on social media.

“Sometimes for political purposes, sometimes for mere humour, we would like to discourage such practices,” he said.

Instead, he advised that people should propagate the preventive etiquette which includes handwashing, social distancing, among others to help fight the coronavirus outbreak.

In a related development, the Member of Parliament for Adansi Asokwa, KT Hammond, says he has directed the Finance Department of Parliament to donate his two months’ salary to the COVID-19 Trust Fund.

“I am donating my salary; April and May to the fund. I am calling on MPs, at least senior ones like me and those on the Minority side, I am urging them to follow the President’s example, vice president’s example and follow suit,” he said.

“Let us contribute physically and in actual resources.”

President Akufo-Addo announced the establishment of the fund over the weekend. Moneys donated to the fund would be disbursed to Ghanaians struggling as a result of the spread of the virus.

The President also pledged his salary for the next three months – April, May and June – as his contribution to the fund which would be managed by an independent board of trustees.

Appointees of the President have also pledged 50 per cent of their monthly income for the next three months, to the Trust Fund.

All deputy ministers have also agreed to donate 50 per cent of their salaries for the next two months, April and May, into the Fund.

“Let’s make sure we fight coronavirus together,” KT Hammond added.

The post Presidency: No govt official has tested positive for COVID appeared first on Ghanaian Times.

No Togolese has tested positive for COVID-19 in Kumasi –KMA

No NIA Staff Has Tested Positive To Covid-19 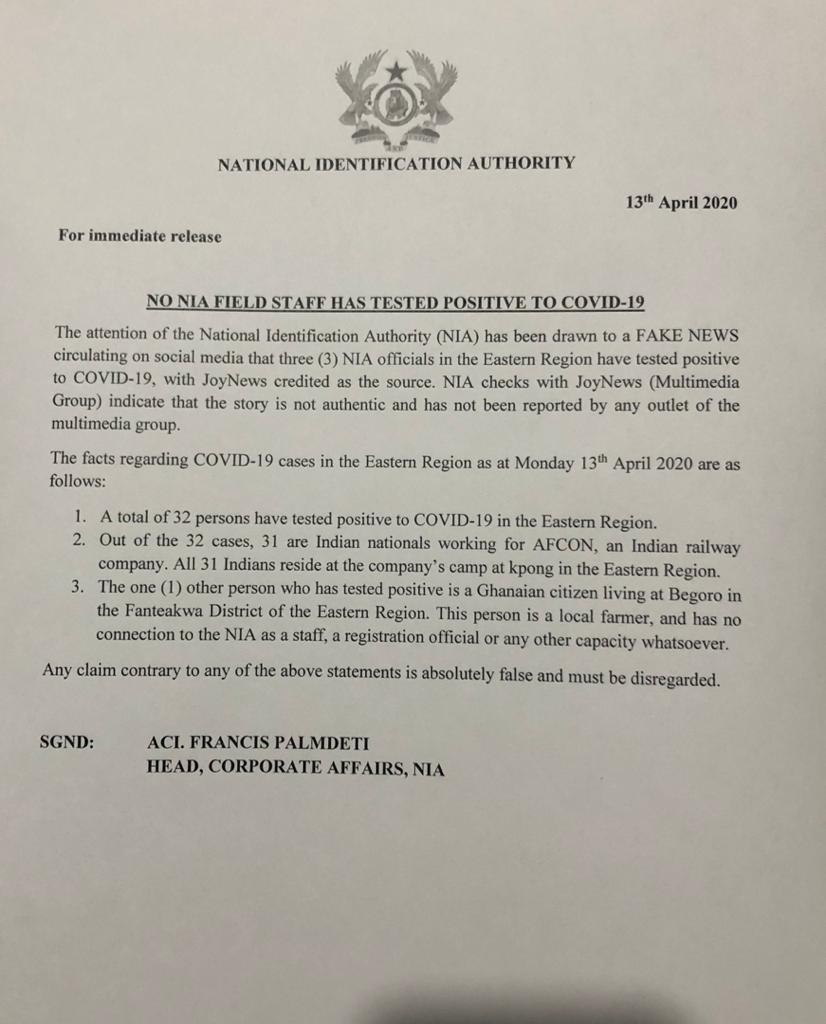 Coronavirus in Egypt: 'The supervising doctor has tested positive'