Togo renews collaboration with Ghana to fight against COVID-19 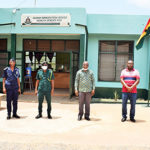 Togo renews collaboration with Ghana to fight against COVID-19

The Togolese authorities have renewed their stance to collaborate with Ghana in the fight against the coronavirus (COVID-19), especially in the area of surveillance along the border.

The Prefect of the Kloto Prefecture (region), Monsieur Berton K. Assan gave the assurance when he met with the Ho West DCE, Mr Ernest Victor Apau at the Honuta Border Post on Tuesday to discuss further measures adopted in Togo to combat the spread of the plague, and other matters of bilateral interest between the two areas.

This was the second diplomatic meeting between the Ho West District and the Kloto Prefecture in the year.

Monsieur Assan maintained that the people of the Kloto and those in neighbouring Ho West District were bonded by the ties of blood, culture and trade.

For that reason, he said, it was only proper for them to watch over and also seek each other’s welfare at all times.

The prefect said that the Togolese authorities had now placed a lockdown on the major cities of Lome, Tsevie, Kpalime and Sokode as part of measures to contain the spread of the disease.

However, he said that the markets were operating on cautious basis to ensure that the people did not starve to death before COVID-19 took greater toll.

Monsieur Assan said that churches were completely shut, whilst public gatherings, including funerals were now limited to 15 in Togo which had recorded three deaths and 23 recoveries from 56 cases of the COVID-19.

On his part, Mr Apau expressed gratitude to the Togolese team for their vigorous cooperation with the Ho West District in bilateral security matters in recent times.

He gave the assurance that the Ho West District Assembly would continue to share intelligence information with the Kloto Prefecture to ensure law and order, and harmony prevailed always along their common frontier.

Mr Apau and Monsieur Assan agreed that although the border restrictions did not include the transportation of food items, medications and goods, strong steps would be taken to ensure that those items were wholesome before they crossed the border.

The post Togo renews collaboration with Ghana to fight against COVID-19 appeared first on Ghanaian Times.

Ghana Tests Security Officers At Border With Togo for COVID-19

AAG joins the fight against COVID-19