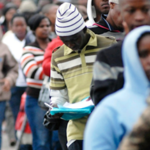 The total unemployment rate in Ghana has reduced by some 3.5 percentage points despite the devastating effects of COVID-19 on the job sector and the economy at large.

This came to the fore when the Minister of Employment and Labour Relations Ignatius Baffuor Awuah took his turn at the periodic “Meet The Press” series organized by the Ministry of Information yesterday.

According to the report of the 7th Round of the Ghana Living Standard Survey (GLSS7, 2019), the total unemployment rate for Ghana is 8.4% as compared to the unemployment rate of 11.9% reported in the GLSS6, 2015-a reduction of 3.5% points.

Further analysis also showed that workplace transmissions were becoming rampant, therefore in order to curtail the spread of the virus at workplaces, the Ministry in collaboration with the National Tripartite Committee issued a 10-Point Communique on Workplace Safety.

The purpose was to consolidate World Health Organization (WHO) and Ghana Health Service (GHS) Preventive Protocols as well as enhance routine inspections by the Labour Department and the Department of Factories Inspectorate which has largely been successful.

The Ministry embarked on a Nation-wide random inspection of offices, shops and factories. “I personally led a team to inspect randomly selected workplaces to ascertain for myself the level of compliance with COVID-19 protocols. Some of the institutions visited within the Greater Accra, Tema, Nsawam and its environs were in the Manufacturing, Service, Retail and Recyclying sub-sectors.

This was to ensure strict compliance with and enforcement of the COVID-19 protocols and guidelines outlined by government.

I am happy to report that 80% of the establishments inspected were complying with the guidelines prescribed by Government and the World Health Organization. I wish to entreat all employers and workers to continue to adhere to the prescribed protocols to ensure safety at the workplace“, the minister mentioned.

On employment promotion, Mr. Awuah disclosed that, since January 2017, his Ministry had continued in line with its mandate to improve the capacities at the National and Sub-national levels for the promotion of decent job opportunities.

The Ministry is also collaborating with the European Union Delegation in Ghana to improve capacity of the Labour Department and its Public Employment Centres (PECs). As a result eight (8) PECs in strategic locations have been renovated and revamped to enable them provide active labour market services, including job matching and career guidance to job seekers.

These centers include Accra, Tema, Cape Coast, Takoradi, Tarkwa, Sunyani, Tamale and the Employment Information Branch (EIB) of the Labour Department (LD). Apart from the routine active labour market functions of the PECs, the main purpose of the renovations and other capacity building interventions is to enable these centers and sections of the Labour Department collect as well as disserminate labour market information in a timely manner to meet the full operationalization of the Ghana Labour Market Information System (GLMIS) objectives.

“Again, in line with the Ministry’s Employment Promotion Agenda, a Ghanaian-German Job Centre has been established in Accra by the Ministry in collaboration with the German International Development Corporation (GIZ).

The purpose of the centre is to implement active labour market interventions that would enhance the provision of decent employment opportunities for job seekers, particularly, young persons who have the intention of migrating outside Ghana through unapproved routes.

Since its inception in 2017 to date, 65,277 persons have accessed services of the centre. Out of this number, 28,901 accessed labour market information/career guidance/coaching services. A total of 4,243 received start-up and business development services to enable them established their own businesses. Also, 2,527 were also posted to firms as interns.

A total of 2,606 were placed in available job vacancies. While 614 returning migrants also received psychosocial and reintegration support“, the Minister said.

The post UNEMPLOYMENT RATE IN GHANA REDUCES BY 3.5% appeared first on Ghanaian Times.