2 die in protests against Sudan coup

2 die in protests against Sudan coup

Doctors say two people have died and dozen others were injured on Sunday in Sudan’s capital, Khartoum, in the latest round of demonstrations against October’s military coup.

A doctors’ organisation allied to the protest movement, called the Central Doctors’ Committee, says 63 people have now been killed since the coup.

The United Nations says it is trying to start talks in Sudan to resolve the political crisis and ensure there is a transition to democracy.

At the start of January, Abdalla Hamdok resigned as civilian prime minister amid continuing friction between the military and pro-democracy campaigners.

Many Sudanese remember the massacre of June 3, 2019, at the sit-in protest site outside the army’s headquarters in the capital.

The thousands gathered were demanding that the military hand over power to civilians – the generals had ousted President Bashir two months earlier after weeks of mass protests against him.

But, on that day in June, the security forces moved in on the protesters and at least 87 people were killed

There is a lingering sense of injustice two years on – and the coup is seen as the second time the army chief General, Abdel Fattah al-Burhan, has reneged on his promises and turned against the people.

While the takeover was not unexpected – there had been tensions between military and civilian leaders who had been sharing power since August 2019 – the timing was daring, and seen as an insult.

Only four days before the coup, millions had marched across the country in support of civilian rule – something that was featured prominently on the national broadcaster.

But, on the morning of October 25, an armed army unit took over the SNBC office in Omdurman, the city across the River Nile from Khartoum, and patriotic music was played.

Former generals and security officers took to the airwaves to justify the move, saying the measures were to rescue the revolution and correct its path. -BBC

The post 2 die in protests against Sudan coup appeared first on Ghanaian Times. 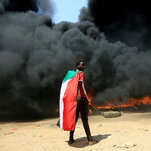 Sudan Rocked by Protests Amid Warnings of a Coup