Indian High Commissioner calls for introduction of yoga in schools

Indian High Commissioner calls for introduction of yoga in schools

The Indian High Commissioner to Ghana, Sugandh Rajaram, has called for the introduction of yoga in schools to help in the holistic development of children

He explained that yoga helped to build the mind, body and soul of an individual, hence the need for its introduction to children and adults as well.

Mr Rajaram said this yesterday when the Indian High Commission commemorated the eighth International Day ofYoga at the Black Star Square in Accra. It was celebrated on the theme “Yoga for humanity”

The International Day of Yoga is celebrated annually on June 21 since 2015, following its inception in the United Nations General Assembly in 2014. Yoga is a physical, mental and spiritual practice which originated in India.

Present at the commemoration were some members of the Diplomatic Corps,   the Indian community in Ghana, Deputy Minister of Health, Ms Tina Mensah, the Chief Executive of the Accra Metropolitan Assembly (AMA), Mrs Elizabeth Sackey and the Chief Director of the Ministry of Youth and Sports Hafiz Adam.

According to Mr Rajaram, this year’s celebration of the Yoga Day had coincided with the 75th independence anniversary of the people of India.

He said the introduction of yoga should be structural, adding that it was the philosophy of life and humankind.

“We should be living yoga, doing exercises, controlling our minds and looking within ourselves as well as live in harmony and peace with each other to give us a peaceful and prosperous world,” he said.

Mr Rajaram was of the view that yoga ought to be inculcated as an integral part of people’s lives, as it was equally beneficial to the aged, men, children and women and not be commemorated only with exercises on June 21 each year.

The Deputy Minister of Health, Ms Mensah said yoga was another form of exercise which entails more than the regular exercises.

She said contrary to the perception that yoga was a religious act,  it had  a lot of health benefits as the instructor told the trainers the benefits and consequences of a particular exercise.

“When the exercises are followed to the latter it gives peace of mind because it has a lot of things to do with the body, soul and spirit of human being and it is an exercise that gives one flexibility,” she added.

The Metropolitan Chief Executive of Accra, Mrs Sackey said yoga offers the platform to exercise as reasons are given for each exercise done.

She said the exercise challenges the immune system and builds it up again urging Ghanaians to exercise at least once a month.

‘Reintroduction of tolling will quicken pace of infrastructure devt’ 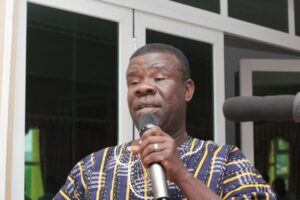 Kitase chief calls for peace in the Akuapem Ridge

Legon clashes: UTAG calls for dismissal and prosecution of culprits