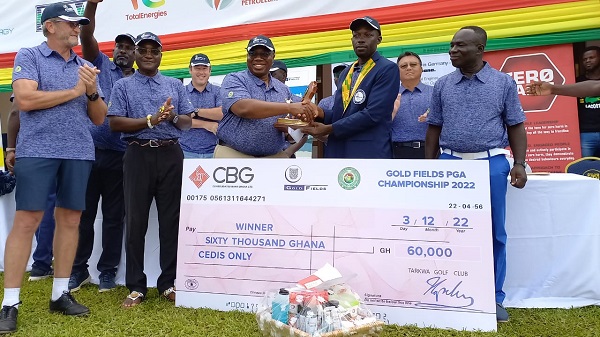 Kojo Barnni emerged the winner of the ninth Gold Fields PGA championship after bagging a Gross total of 286 at Wasa Damang in the Western region on Saturday.

Barnni showed his class on the course in the four days the championship lasted to clinch what became his third success in the competition, having swept the honours in the 2017 and 2018 editions.

It was a fierce battle between the champion and Vincent Torgah – the two professionals tipped to battle out for the ultimate prize.

Indeed, they lived up to the billing with Barnni having the last laugh.

With a total of two under (-2) course par over four days, Barnni jumped to the lead after breaking the second tie ahead of Vincent Torgah, with just a shot in the sudden death played on hole 18.

Torgah was consoled with the second position.

Once again, Barnni lifted the magnificent trophy, received a cheque for GH¢60,000.00 from EVP for Gold Fields and Head of West Africa, Mr. Joshua Motorti and was decorated with the Blue Jacket by Torgah.

Speaking to the media after the presentation, Barnni attributed the victory to hard work on the courseand was full of praise for his trainer, Akwesi Prempeh, who he said “pushed me to work hard so I can overcome my competitors.”

He continued: “When I look back in the tournaments I have participated in this year, I can say that I performed really well in 2022 and enjoyed my play too.”

He said several plans have been drawn by his team for next year and was confident he would maintain the high standards set this year.

Emos Koblah followed in third position with Gross total of 291, with Maxwell Owusu- Bonsua in fourth with 292 and Yaw Barry in fifth with 295.

Robert Degbe won the seniors category with a Standard Scratch Score (SSS) of 223 to pocket the GH¢ 20.000.00 prize money.

The four-day event which started on Wednesday and ended on Saturday featured 33 regular professional golfers and 16 senior golfers.

Other winners include Emos Korblah in 2015, Lucky Ayisah in 2020 and Christopher Francis from Nigeria as the only foreigner to lift the trophy. NDC to hold presidential and parliamentary primaries on May 13