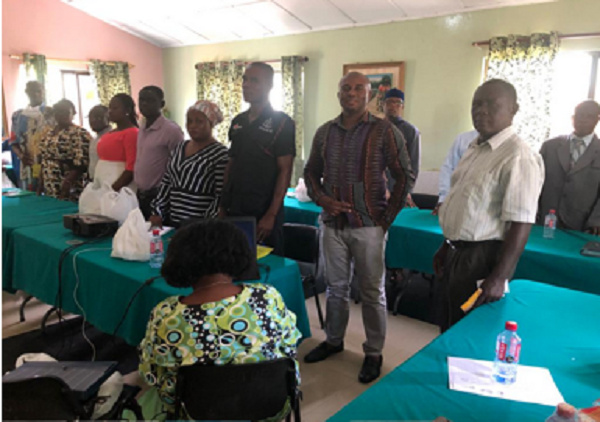 Ghana Web
The African Women Lawyers Association (AWLA) has organized a 2-day workshop on court processes and judicial corruption for stakeholders in Kasoa and Asamankese, the municipal capitals for Awutu Senya East and West Akim, respectively.

The training was meant to improve the knowledge of citizens and officials of state institutions in rights protection on court processes and judicial corruption for improved justice delivery in the districts.

The program which was held between 21st and 24th September, 2020 forms part of the implementation of AWLA’s “Promoting Civic Actions for Effective Justice Delivery”, a pilot project meant to create an enabling environment for effective justice delivery for citizens, particularly poor women who seek justice at the courts in Kasoa and Asamankese.

The intervention which is line with SDG#16.3: access to justice for all, is funded by the German development agency, GIZ. Specifically, the project seeks to institutionalize an interface platform for citizens' collaboration and engagement with the courts on pertinent issues affecting justice delivery.

In furtherance to project objectives, AWLA has dedicated a mobile phone for citizens’ complaints on justice delivery and created Court Users Committees (CUCs) to identify and operationally manage citizens’ complaints on justice delivery. The CUCs are made of officials in justice delivery and rights protection, including officials of the Kasoa and Asamankese Districts and Magistrate Courts, the Domestic Violence and Victims Support Unit of the Ghana Police Service, the Municipal Directors of the Commission on Human Rights and Administrative Justice, the National Commission for Civic Education, Department of Social Welfare, the Kasoa Camp Prison, the local chapter of the Federation of Disability Organizations, as well as other identifiable groups such as the Tailors, Beauticians and Market Women Associations.
The formation of the CUCs with members of state institutions in rights protection and justice delivery is informed by the fact that a key challenge to effective justice delivery is that, the state actors delivering it are often the source of injustice.

The training which was delivered by Madam Effiba Amihere, a private legal practitioner and consultant, focused on the objectives of the Judicial Service of Ghana which among other things, is to create the best environment for justice delivery, the hierarchy and functions of the courts, the procedure for court filing, criminal and civil cases, instances of judicial corruption, as well as evidence and docket handling.

Other issues discussed with practical examples from court users in the project districts included factors that affect effective justice delivery such as frequent adjournments, missing dockets, absence of parties and lawyers in a case, case overload at the courts, transfer of judges, absence of judges and magistrate due to sick leave and other factors, vexatious litigation, as well as abuse of the judicial process by parties, the police, and the court officials.

At the end of the session, stakeholders were expressed satisfaction with the new awareness created by AWLA, and called for extension of the project to enable similar sensitization on court processes in hard-to-reach communities for improved citizens’ knowledge on the judicial process, behavioural change among court officials and confidence in the court. Read Full Story
Advertise Here contact ads[@]ghheadlines.com
Related Items news
news